Hi, this is my first time making an Open Source project, so please feel free to give me lots of constructive criticism.

rParticle is a small module (around 80 lines of code) which was made with the sole intention of allowing developers to quickly and easily make 2D GUI particle systems.

How do I use rParticle?

It is my opinion that rParticle is exceedingly easy to use. I was able to create the following effect in only ~28 lines of code:

Here is how this 3D Gui particle effect is done:

Just download the module and put it somewhere that you can easily access it. I tend to put mine in ReplicatedStorage.

rParticle was created to give as much control over the particle as possible to the developer. This means that the particle can be (for the most part) any GUI Object (ie Frame, Button, TextLabel, ViewportFrame, etc…)

In this example, I created a ViewportFrame called ParticleVP.
Inside of this ViewportFrame I placed a model of my character and a LocalScript.

The contents of the local script are:

Finally, I stored the Particle in ReplicatedStorage

To emit the particles, you will need two components.

In this example, I used a Frame, but you could use pretty much any GUI object.

The code I wrote to emit the particles is as follows:

On the first line, I am including the ParticleEmitter module and creating a new ParticleEmiter using .new(). The first argument I pass in is the “hook” and the second is the particle.

As you can see, there are various properties that you can set, many of which are listed on the GitHub README.

In this example, I am setting the rate of the emitter to 10 particles per second.

Then, below, I modify the callbacks onSpawn() and onUpdate() to handle the logic of the particles.

I hope this module helps some people out there. Let me know if there are any questions, as I am aware that my documentation might leave some things to be desired. I am still new to the Open Source world, so I will be working to get better at writing documentation.

Thank you for reading!

Feel free to respond to this thread with any questions or requests for help.

This looks like it would come in real handy for UI designing.

Keep up the great work!

Thank you very much! Im glad you like it.

Let me clean it up a bit. It might help.

ParticleVP is the name of the Instance that is created in step 2, and stored in ReplicatedStorage.

Hmm, this is quite interesting, thank you for script! You get a like from me! I’ll use it in my game later

Hey there! Thank you so much for making this module! It is probably one of the most useful I have seen. I do have one question. Is there any way to destroy the ParticleEmmitter? I have tried making the maxAge a negative number, but that just makes it flash.

Edit: I have found a destroy function inside the module, but it does not seem to work.

Sorry for bumping this topic, at least it wasn’t a year old.

How would you go about making this work with a billboard ui to use as a damage indicator? I’m having issues with getting it to work.

Sorry for the late response!

I’ll look into adding this in to a future update.

Hi, sorry for the delayed response. Right now the ParticleEmitter code uses RenderStepped which is only able to be accessed from the client. Assuming your billboard is on the server side, the code, as it stands will fail.

I can simply resolve this by using something like Stepped instead. I’ll look into this and resolve this in a future update (possibly out tonight if I have time).

Just a minor update. I’ve made some changes to the code and I’ve fixed a bad bug that I discovered. 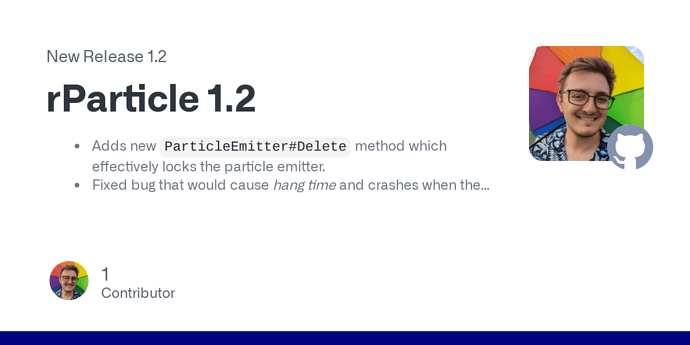 Adds new ParticleEmitter#Delete method which effectively locks the particle emitter. Fixed bug that would cause hang time and crashes when the particle rate was set to zero or below. rParticle now ...

Changes the update loop to RunService#HeartBeat() so that the script may be used on the server side too.

Just bookmarked the post. This will be very handy for UI Designing.

Thank you. I’m glad you liked my work!

How will I make a particle that does this when I click on a button?

Looks like the spray animation is just a bunch of circles flying off into random directions and then dissipating.

You just need to create a circle image. Use an image UI element to represent the particle. Then when the particle is created set the direction and speed to something random within a short range. Then reduce the opacity of the particle as it reaches the end of its life cycle.

Thank you for this. I used this for my Daily Login Reward confetti effect to make it more exciting! Saved me some time…

will there be flipbooks lol

Im not sure what you are asking? Can you elaborate? 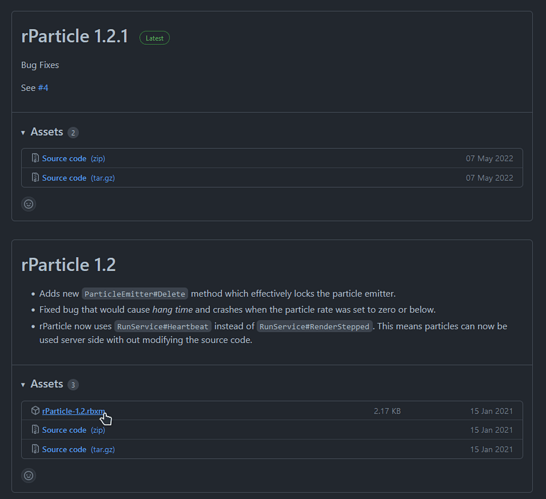