Ok this may be like the 40th FPS tutorial but I’m going to make this beginner friendly (hopefully). I will not be using OOP but I will still use module scripts

Why did you make a “beginner” tutorial instead of an advanced one?

When I first tried making an fps framework, I didn’t know what to look for and watch out for. I remade my fps framework 3 times to actually make it somewhat usable (it wasn’t great). This tutorial aims to teach you the concept and ideas of how to make one and in no way supposed to give you a polished fps framework.

(streamable keeps failing for some reason and i dont know why)

Before continuing, you need to have some knowledge on:

If you have any question you can ask me here (check social link): Black Cube Collective - Roblox

I’ll explain how to make bullet replication, hit detection and aiming in a part 2, tell me if you want a part 2 lol

( also for some reason the videos doesn’t load sometimes )

To make an FPS game you will need a viewmodel or fake arms.

Here is the viewmodel I used: viewmodel.rbxm (5.2 KB) 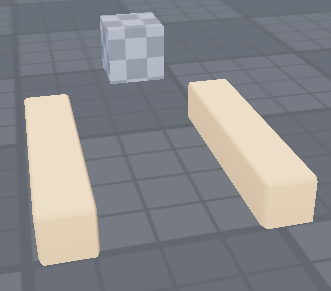 If your viewmodel has accessories just Motor6D the accessory to the arm (or to whatever the accessory is resting on). Now Motor6D both arms to the HumanoidRootPart

Last thing, make a Motor6D called ‘Handle’ that is where we will weld the gun to the arm.
(Part0 = HumanoidRootPart, Part 1 = nil)

Now your viewmodel hierarchy should look something like this 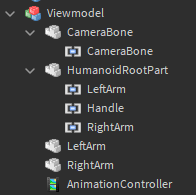 (also if your viewmodel has a humanoid, delete it, we’re going to load animations use AnimationController)

After your done put the Viewmodel inside ReplicatedStorage, lets talk about the gun

You can have any gun you want, the less part the better. We’re not going to Motor6D the gun yet, we will handle that later.

We’re going to make the gun components (aka parts that are going to be used in scripts) You must have the barrel, handle, sight. Put all of those in a folder called “GunComponents” 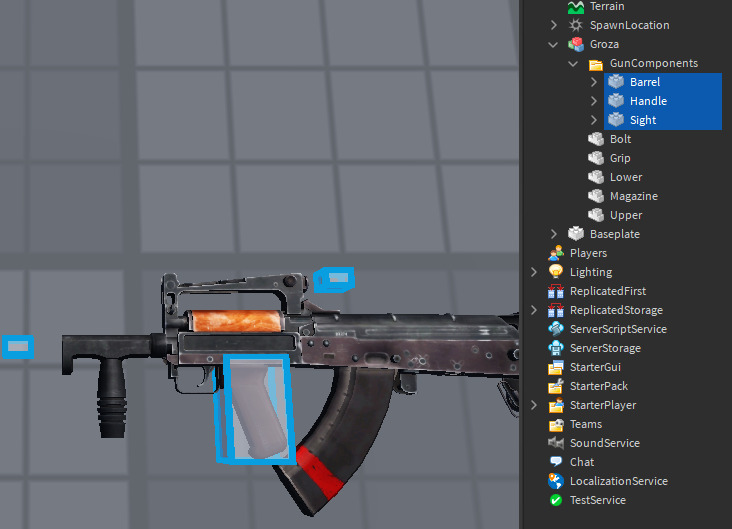 After your done, put the gun in ReplicatedStorage (oh yeah the ‘Sight’ part does nothing because I’m not going to teach you how to aim in this post, maybe later).

First lets make a LocalHandler, you can put the script in StarterCharacterScripts or StarterPlayerScripts, I put mine in StarterPlayerScripts. Now make a module scripts in ReplicatedStorage, I’m going to name this module script… ‘MainModule’ very creative, I know. Although we’re going to put a lot unrelated functions, I’m just going to name it MainModule so I don’t confuse you guys.

First open the LocalHandler and parent the Viewmodel to the Camera. So it’s easier to find the viewmodel.

If you test it now nothing will happen, now open your MainModule and make this function:

This will position the viewmodel’s HumanoidRootPart to the Camera’s CFrame. Then we will want it to update it every frame, Just attach this function inside a RenderStepped!

Now it will update every frame! Now you should have something like this:

Step 3: Animating and positioning the gun

Before we position and animate the gun, do you remember when I said this?

We’re not going to Motor6D the gun yet, we will handle that later.

We’re going to do that real quick!

Alright lets make a function for welding guns, I’m gonna call it module.weldgun(gun). The concept is that we will pass a gun object, and get the parts and weld it all to the handle.

(VERY VERY important note: make sure you add if v ~= Main then or else when animating it will crash moon animator)

Now we have that out of the way, first step is to make it so the gun welds to the viewmodel. Let’s make an module.equip(viewmodel, gun) function.

We’re basically setting the Motor6D to the gun’s handle. Now the gun is in your face! no!! 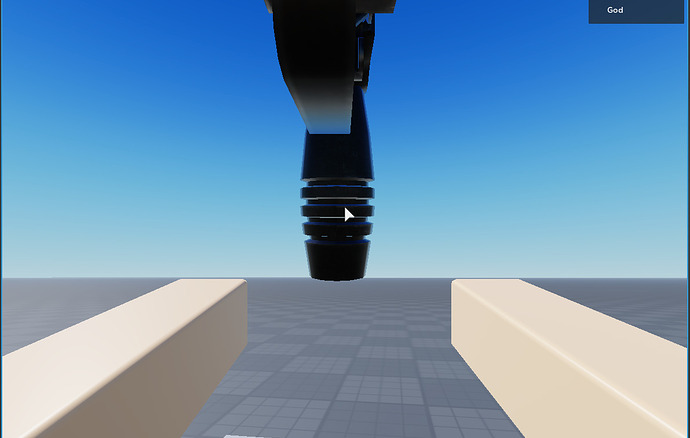 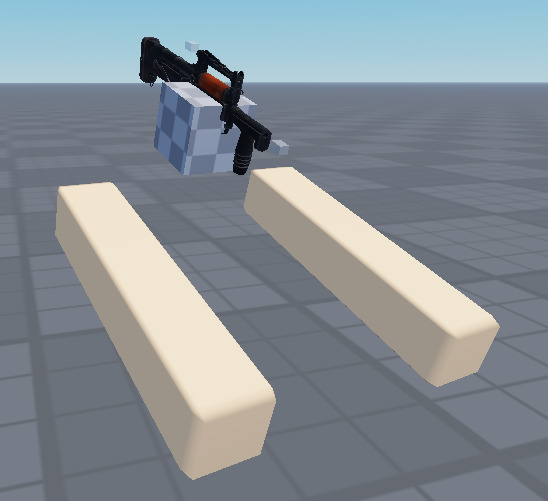 We need to rotate the viewmodel correctly first before animating, so just select the HumanoidRootPart and set its position to 0, 0, 0 (optional) and the rotation to 0, 0, 0 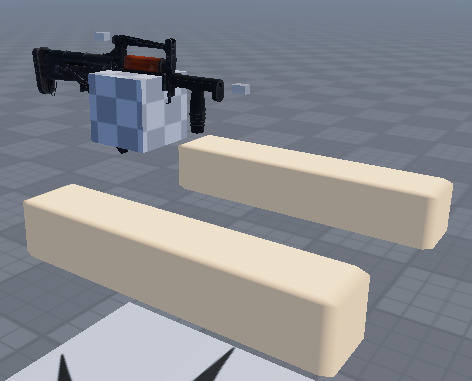 Voila!! Lets get animating. Now we want to make a hold animation. Just put the viewmodel inside moon animator and start animating! In the end you should have something like this 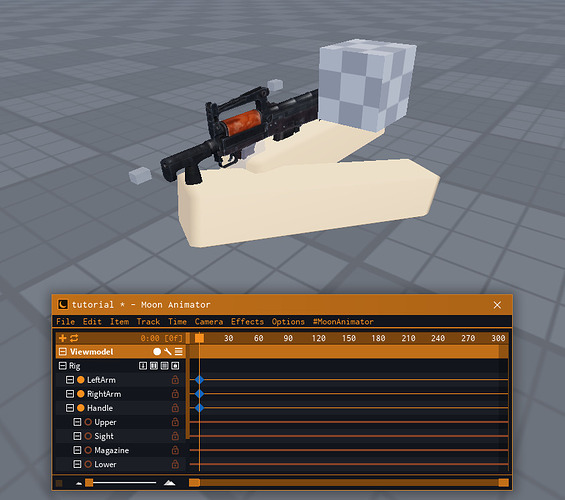 Make sure it’s looped and when your done, publish the animation!

Lets give it a try

Voila!! The animation works! If it dosen’t work for you check the animation and the Motor6D and also make sure the Animation object is valid.

I’m just going to make a basic projectile module, you can skip this step if you know how to use FastCast

Alright so in the MainModule let’s make a new function called module.cast(). The idea is that it will create a bullet and then position it self to the barrel facing to the mouse position then making the bullet go forward.

First step: Making the bullet go to the barrel

Later we will pass 3 information, the gun, the end position and the velocity of the bullet or studs per frame 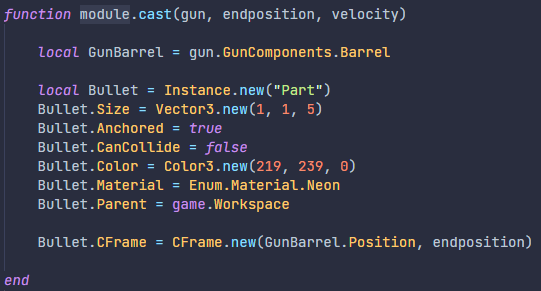 We will use a RenderStepped to make the bullet travel smoothly

Third step: Destroying the bullet when it goes too far

We’re finished! The gun dosen’t do much… but I’ll continue this tutorial if people think I’m worthy enough to continue this. 20 hearts and I’ll do a part 2! If it there was a part 2, I would probably teach you how to make recoil, bullet replication and hit detection (let me know what gun feature do you want). Part 2 is out now! 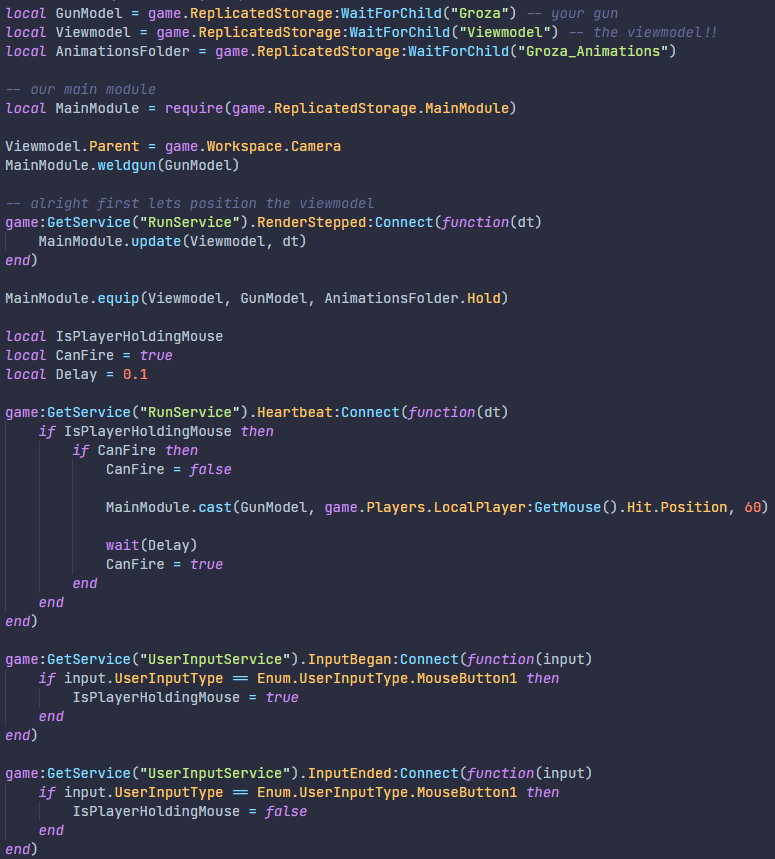 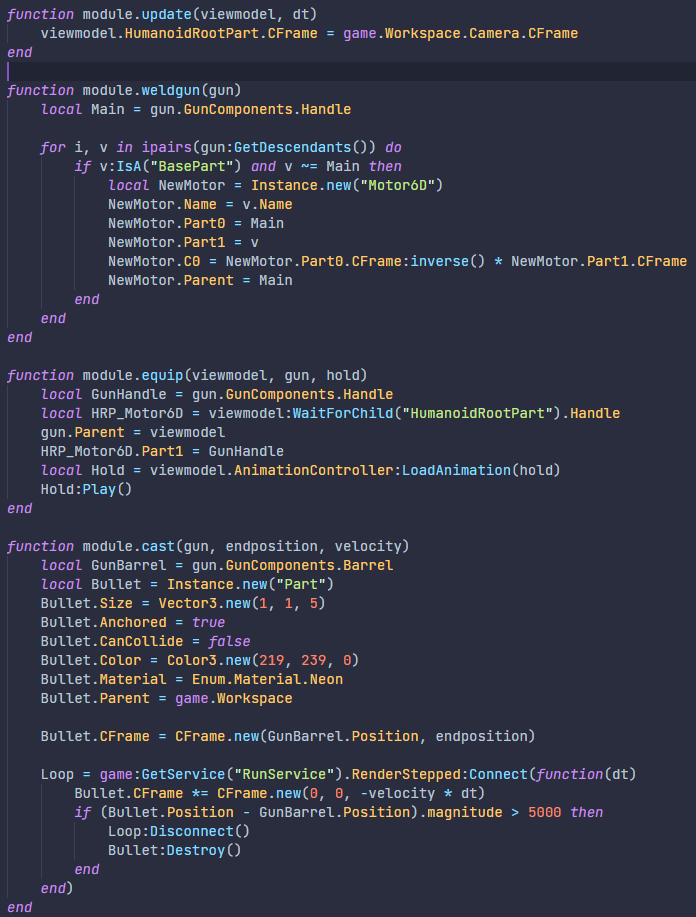 If you have any questions you can join the discord server

Well you guys seemed to like the tutorial so heres a Part 2. ¯\_(ツ)_/¯ (thanks for 33 likes!!!) If you just came, you’ll have to first see the original post to continue else it might get confusing for you, check it out here. Also this tutorial is a bit long might take you a day or two to complete this. (also sorry if it’s a bit complex and confusing for some people, tried explain it as much as I can) Objectives: Recoil, Muzzle flash and sounds Bobble & Swaying Hit detection Bullet replicat…

264 Likes
Accidentally made my gun a 2-round burst instead of fully automatic
Start of and FPS. Where should I start?
How to make a basic gun that shoots and reloads
Vector3 expected, got Instance
Help scripting a glock
Designing an FPS Framework: Beginner’s guide [PART 2]
How do you make a High-Quality Gun System?
Moon animator animation not playing
Where to start for fps framework/fps guns?
How do i make a gun system like r2d2 or Base Wars?
Any methods I can use to move first person body parts?
How could you make an fps framework (like the old phantom forces one)
ViewModel Scripting Help
How do i make a first person view
How would I go about making a FPS framework?
FPS/Viewmodel Camera Animation
Minhkhang2401 (Ryan) May 1, 2021, 3:08pm #2

You should use Code Bricks, they look like this: ```

Start and end the string with: ``` 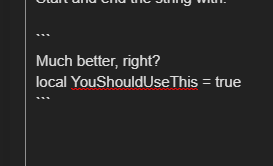 I’m not sure if it’s something I wrote wrong or what, but the blank arms are facing the wrong way, what would I do to fix this? I’ve tried just changing the direction of the model in studio it doesn’t work

This is how it should look
If your still having trouble here is the viewmodel I used: viewmodel.rbxm (5.2 KB)

So far very good, im at this point in the code, and its giving the errorbelow and not putting the gun in the viewmodel, any idea whats happening?

For making this into a tool and making multiple guns, would it just be as simple and renaming the handler and module script to the gunname+handler/module and turning them off an on depending on if the player has equipped the tool?

Module scripts shouldn’t be replicated for a single tool, they should be kept in ReplicatedStorage. Turning this system into a tool based system isn’t easy. I’d also recommend you just use only 1 Handler. With this you have to constantly check what gun is the player holding and if they equipped the tool. If you want an easier way to implement it I’d just recommend you look at other Community Tutorials because it can get a bit complex when trying to do this but it is very do-able.

Well part 2 is finally out, check it out here.

Well you guys seemed to like the tutorial so heres a Part 2. ¯\_(ツ)_/¯ (thanks for 33 likes!!!) If you just came, you’ll have to first see the original post to continue else it might get confusing for you, check it our here. Also this tutorial is a bit long might take you a day or 2 days to complete this. (also sorry if it’s a bit complex and confusing for some people, tried explain it as much as I can) Objectives: Recoil, Muzzle flash and sounds Bobble & Swaying Hit detection Bullet repli…

Oh god, I didn’t notice this:

You only equip and weld the gun once, you don’t need to do it for every frame. So instead it should be like this:

I apologize for not noticing!

Dont worry about it, I ended up looking at the end of your scripts and realizing my mistake

So I got an error in the module script, I don’t know why, here is the error:

Here is the module script so far:

Here is the line of code that the error goes to:

I don’t know why it’s like this, it’s exactly the same in your code.

Hey! Sorry for not responding (i was at school), but make sure your “endposition” is a Vector3.

I guess we live in very different time zones, but I fixed that issue, but the bullet doesn’t spawn at the current position of the barrel, I don’t know why, it doesn’t even spawn at the barrel, it just spawns in the middle of your screen.

Here is the link to my the topic I made just to figure out this issue: topic

Here is an image of the barrel’s position: 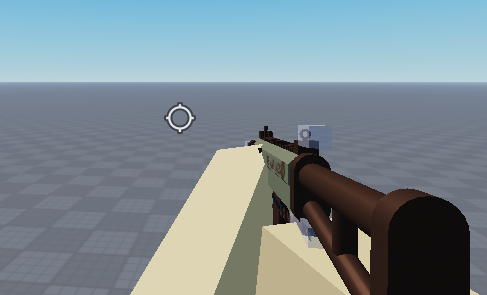 You can barely see the barrel, and still it’s not in the center of the screen. I made a video of shooting the gun, but the file was too big somehow.

Also I noticed that part 2 doesn’t have aiming and reloading, a part 3 would be amazing.

This is where the bullet spawns also: 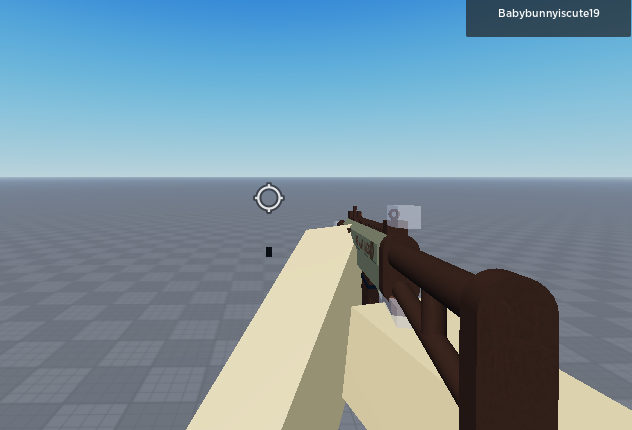 If possible, could you provide an rbxm file of the module script for this part?

A video would be much better for me to understand but for now all I could recommend is to print() the barrel’s position and the camera’s position (since you said the bullet were spawning in the middle of your screen). And also try doing this after the CFrame.new(barrel.Position, endposition):
Bullet.Position = barrel.Position

Regarding about aiming in reloading, I already gave a statement about aiming here and I won’t be doing a reloading tutorial since it’s very simple.

Update: ok so mid way writing this you editted your post and it looks like the bullet is spawning at 0, 0, 0 (correct me if im wrong). but still try the possible solution above