How do I make my minecart stay on the rails?

I’m trying to make a minecart for my game, and while I can move it just fine, I can’t get it to stay on the rails (Which right now is just a block beneath it w/ velocity set).

I’ve tried to add invisible bricks beneath it that go under the “rails” like those old roller coasters used to do to stay on the track, but that doesn’t really work and if I try to make the cart take a turn it totally breaks.

Sorry if I’m being too vague, but I’d like some help before I go back to working on it again…

UPDATE: Here’s some pictures of what I’m talking about:

The minecart is being held onto the tracks with these red bricks: 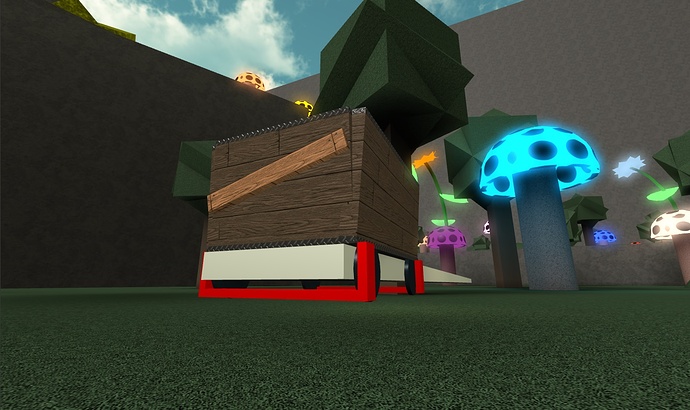 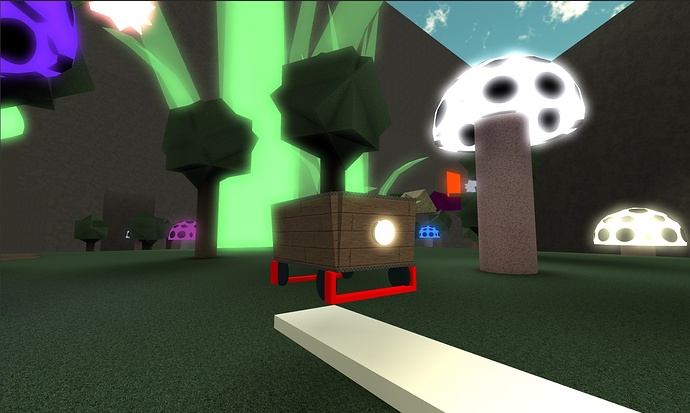 This is what happens when it hits a turn:

15 Likes
Better methods for keeping a train on a track?
Drivable Train/Tram
How do you go about making roller coasters that don't glitch out?
Refining train physics
Switching all games to the PGS Physics Solver next week (March 4th, 2019)
Issues with CFramed tram
EndorsedModel (EndorsedModel) June 27, 2018, 12:59am #2

I think a picture of your current setup would help when you get the chance to post one.

I’m having a hard time picturing your setup and with the absence of pictures or a place file, it is impossible for anyone to give you any advice.

Please attach some visuals, files or other helpful information to your post in order to explain the situation, and refer to the ‘building support’ category guidelines in order to ensure that other developers can help you in a meaningful way.

Alright, I finally found time to upload some pictures.

I wouldn’t recommend doing it like this. If you are wanting to allow players to ride in it, use a BodyPosition tweening between nodes on the journey, that way the cart wont be touching anything and can’t get stuck, especially if you put it in a collision group only players can collide with.

Otherwise, it’s a lot easier, use CFrame to tween between nodes on the journey, it will still be interactable but players won’t be able to ride in it.

This is the same issue @badcc had with jailbreak trains, how to keep them on track and looking good but also interactable and ridable by players.

I really don’t want to use CFrame. This is in a large game and I don’t want to slow the server down making CFrame changes very often. It will also look choppy. (And yeah, of course I want players to be able to ride in it! How cool would that be?)

I like the idea of BodyPosition, but would I not run into the same problem? How do you recommend tweening them? Making it rotate like that seems like it would not be fun to do, or an elegant solution.

Ideally, I’d find some way to get it to stay on tracks using some physics wizardry or something… But if not I guess I’ll try CFrame since it seems to be the easiest way.

Here’s an interesting video on the physics of real-world trains. I don’t know if you can recreate this in roblox, but it might be interesting to look at.

Yeah I’m not very good at anything physical in Roblox…

How do those old roller coaster games do it? I know it has nothing to do w/ CFrame.

Try using a redstone torch.
If that fails, use CFrame. It is practically the universal way to move both vehicles and interactive models on Roblox.

Old roller coasters still work today, the problem is they not very “reliable” in terms of running. They can either run smooth at one point, and the next thing you know it, it launches it self off the track. This has many factors, depending on the speeds on the tracks, the way the “connectors” are designed holding a cart to the track, and the player actions on it. (such as trying to jump up and down on the cart moving, which may cause it to break). If would like anymore information, you can either DM me or contact me on Discord! TheDreamDealer#7445

Note: I used to create and make old coasters

Alright I’ll just suck it up and use CFrame. It will probably be a lot easier than any other way. Thanks for the help guys.

Okay, I was wrong, CFrame is not my solution, for reasons you stated. I need players to be able to ride in the minecart. How do you tween the BodyPosition to do this?

What about turns? That seems like it’d be pretty complicated.

It shouldn’t have a problem actually going round a turn, but to make it face a certain direction you would probably want to use BodyGyro

I have a Minecart in my game, and looked at a bunch of approaches while working on my project.

Use CFrame:
Moving objects like characters use physics to move around – they’re not built to work with objects moving with CFrame. You lose a lot of awesome functionality like interpolation and bodies following the moving part horizontally, and experience problems like bodies clipping through moving parts or getting flung far away because a part teleported into them. There are ways to mitigate this, but implementing custom physics with CFrame is a major hack. It doesn’t provide any real benefits, and is a massive headache.

Use legacy body movers:
Old physics objects like BodyGyro/BodyPosition are no longer being actively supported and can have unpredictable behavior.

To dictate where the minecart should travel, I use the node system suggested by @SteadyOn earlier. If you look at the track below, you can see green dots. These are attachments which I use to designate the next node the cart should travel to:

With this, you get the control of CFrame, but the benefits of physics simulation at the same time. In the following in-game (with latency) video, the minecart’s network ownership is set to the player sitting in the cart. The video is recorded from the perspective of the player standing on the cart.

Note that because the minecart’s location is being controlled by CFrame, it does not speed up or slow down on slopes. This was intentional for my use case, as I wanted to be able to build tracks without worrying if the minecart had enough speed to get to the end – it just goes the same speed always and predictably. If you wanted a more accurate physics simulation, you could probably use a different set of constraints.

139 Likes
RailConstraint Physics Object
Train Driving Logic
How Would I Make an Effective Node System for a Subway/Train?
How can I make this train follow a curved path?
How To Make A Train Using Nodes And Tracks
Accelerating and deccelerating using CFrame and tween service
How would I go on making a Ski Lift for a game?
How do I make a train work?
Refining train physics
Making a proper train that includes inertia
2021 Moving Platforms are there any new best practices?
Making train using Align Position and Align Rotation
If I were to make a train, and move it smoothly across a rail, what would I use?
Problems with implementing multi-car trains on node based railway track system
Train moving on Server with CFrame Lagging
CFrame a roller coaster
Best approach to moving a plane?
Should I use TweenService or CFrame to move a part? Or something else?
Moving/Rotating Boat
Model with seat breaking when force is applied
Practical systems and solutions (scripting)
Tween speed won't increase past a certain point
Recommendations on effectively having this car move
How do I make part stick to moving parts without welds
Intended_Pun (Intended_Pun) July 3, 2018, 3:25pm #18

Thanks so much! Especially for all the details.

I know I won’t stop asking so many questions, but how did you get the cart to always stay above the node? I’ve been messing around for over an hour and can’t replicate that. It usually drags a bit behind before moving which makes it look weird. It’s also getting stuck after a short time again.