The process of rigging a custom character

This topic is not for mesh/bone rigs.

I will not be showing how to animate. I will only be showing you how to create/rig the character, and how to setup the Roblox animation plugin with your character.

I will only show the process of rigging with RigEdit. For other tools you may have to look for a different tutorial.

So, lets start with actually creating the character. Any layout works perfectly fine. This is the easiest part of the process.

This is the character I made: 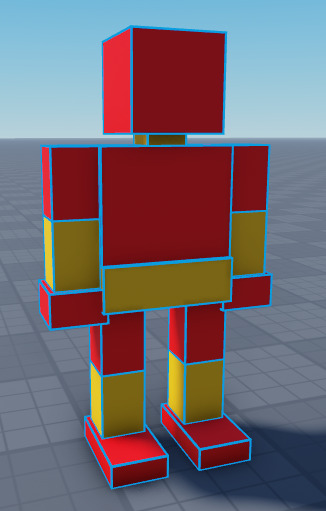 You don’t need to color it like I did, I just did that so it would be easier to see the difference between parts.

Make sure to group these parts together.

Creating the humanoid and root part

First, create a new Humanoid. Simply put it into your model, and turn off “RequiresNeck.”

Now we need to make something called a HumanoidRootPart. This is essentially the base of your character. This part is needed to function.

So first, create a new part. I would span it across the whole torso, like this: 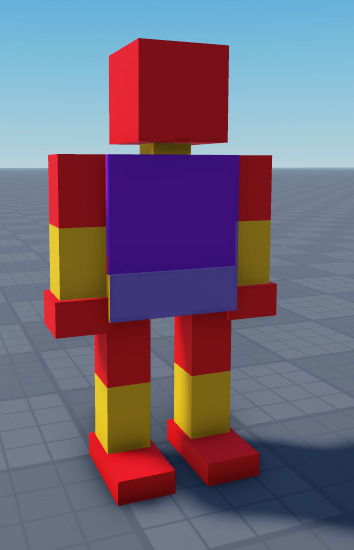 Name the part “HumanoidRootPart” exactly. Keep it slightly visible as we will need this later.

Then set the model’s PrimaryPart to the part you just created:

Now we need to name each part. This is very important.

Do not name any parts the same, or the animation plugin may not work with it.

Make sure the part names make sense, and are easy to remember. Heres an example of how I named mine. You don’t have to name them how I did. 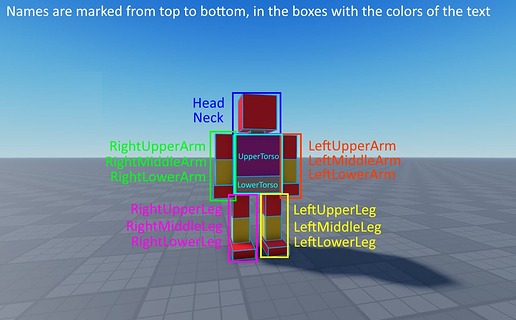 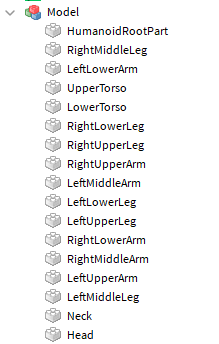 I forgot to put a humanoid in this picture, but just pretend its there!

Now, lets start the rigging part. This is pretty confusing, so make sure you double check everything you do here.

First, select your model. Then, press the “RigEdit” button in your plugins tab.

After that, follow this short video tutorial I made.
Sorry for the shaky voice, I was sick during the recording 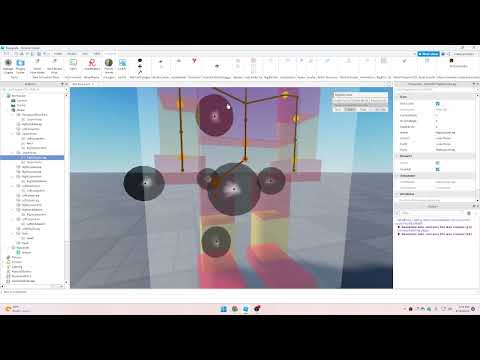 Playing as that character

Simply rename the model as “StarterCharacter” and move it to starterplayer. Then if you play the game, you should be that character you just rigged!

Now, you should have a fully rigged character! Try this with any animation plugin, and see if the parts move. If something goes wrong, here is some things you could do.

Number 4 or 5 is the one you probably need to do.

Thanks for reading my tutorial. Hopefully this is helpful for you!

I have a question:
Does the Animate script makes the animations visible for all the players?

Also, thanks, i learnt something new today

Animations loaded on the client automatically replicate to the server so yes, it will be visible.

Is there anyway to make a rig that has only 2 parts and animate it?

How to animate a character that has only one part? Scripting Support

Hello, I need help knowing how to stick eyes on the characters head, I don’t know what to do since i’m new to animating!

All you have to do is rig it like you did the arms/torso etc.

Also, why can’t I move my character? (when I’m playing)

I don’t think I mentioned this, but if you have

on then you need to have the character not touching the ground. Also make sure it isn’t anchored.

Thank you so much for the help, I will notify you if I have any problems relating to this! Very helpful, keep up the good work.

When you have join surfaces on and move a part to another part, it will connect both of those together. 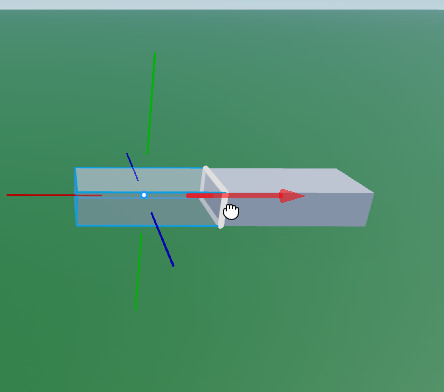 Without it, the part will not connect to the other part automatically.

Oh, that still didn’t work for me, but I tested a r6 character with a r15 platform and it didn’t move but when I test a r15 with the same platform it moved, how can I fix this if it is a custom character?

Not really sure why it wouldn’t be working. Are you able to send a place file of the custom character (only character if you don’t wanna send the game or whatever) in DMs? I will look into the place and see if I can find an issue.

You can actually turn the humanoidrootpart to the correct side, resize it, and just re rig that part and it should fix that

I recommend deleting this and resending in dms, since its public unless you are fine with people stealing your stuff

Oh yeah, I don’t want this to be leaked, I just don’t think there are many people that will see it in here

Does the custom rig need to have ALL of the same joints and ALL of the same parts? For example, what if I make a character without arms, however it has 2 legs, 1 neck, and that connects to the head. And in the center is a torso.

It seems correct when I rig it however when I try animating, the parts don’t move. It is set to R6 format on the Humanoid and I’ve followed every step, the rig is unanchored and not welded.

I hope someone is able to help, thank you! If you have any questions let me know.

Something that you may be having an issue with is the part names. They don’t have to be exactly named how I named them, but just make sure to name them something that makes sense. Like “RightTopArm” for the shoulder or “LeftBottomLeg” for the foot. Those parts do not need to be there if you don’t need them. Joint names don’t really matter. Two parts or joints can not be the same name.

By the way, you MUST have a HumanoidRootPart. It will not function without it.

Okay, I believe all of my names make sense, I have posted it below.

Not included in the photo:
Humanoid, set to R6. 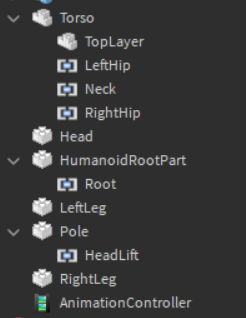 Does the animating work? Or still frozen

By the way try making your rotation snap 5 or something small, you might have it very big by accident