Part of the Elttob Suite - Built in collaboration with @boatbomber

I’m very pleased to announce the release of InCommand! Made together with the masterful @Elttob as part of his incredible plugin suite. He has, as usual, done a fantastic job making this plugin have some of the nicest UX a plugin can offer.

InCommand features a script editor on the right, and a list of saved scripts on the left. 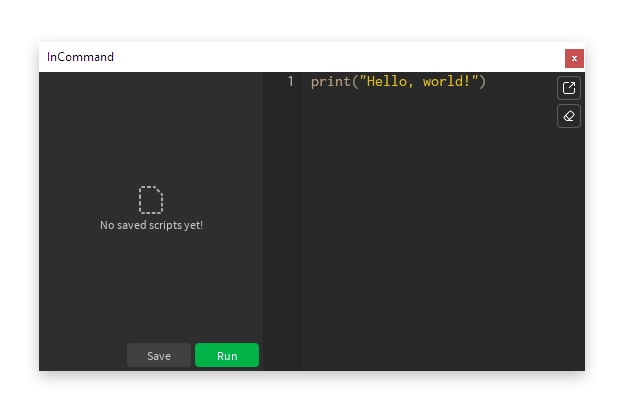 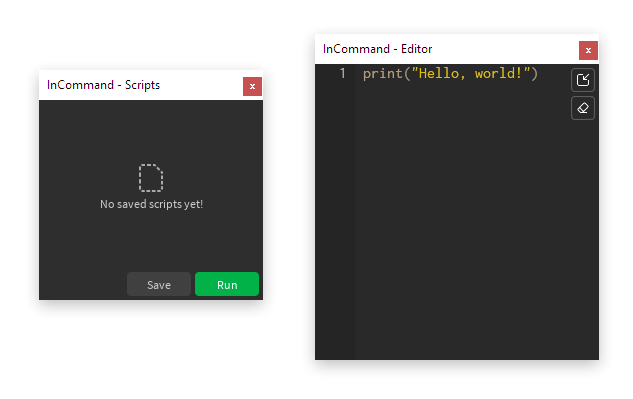 You can write Lua code in the editor, and run it using the Run button in the bottom-left.

Additional run options will appear if you’re testing your game with Accurate Play Solo. Using these run options, you can easily run your code on the client side or server side in one click. This is a huge advantage over the Studio command line, as you can run your code on either end of the network with a single click. 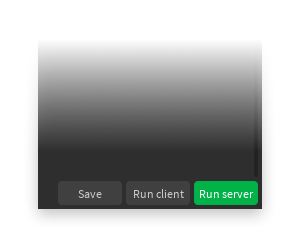 Next to the Run button is the Save button, which lets you choose a name for your script and save it to the script list. From this list, you can load a script into the editor, or delete scripts from the list. Scripts saved here will persist across games, places, and studio sessions as it it stored within the plugin, so you’ll be able to use this anywhere. 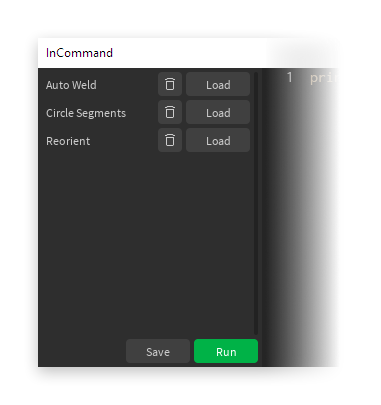 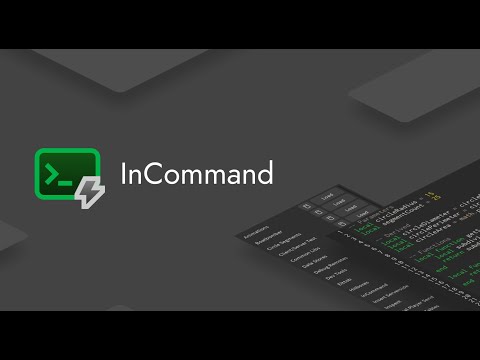 Intro animation, music, voice-over, and recording all done by our one and only @Elttob

Get InCommand now and bolster your workflow:
https://www.roblox.com/library/4987562465/InCommand

As always, feel free to reply to this thread if you have any feedback, feature requests or bugs!

Known Issue: Saved scripts occasionally get cleared for unknown reasons. Save a backup while we work out what’s causing this issue and resolve it.

296 Likes
Simulate an exploit?
In-Game TextBox IDE
Atmos - professional skyboxes and lighting
What are the most useful plugins for scripting in your opinion?
Tabs appear as spaces in textboxes
Bloxxer's Studio Development Setup
Is post styling broken?
Roblox Studio Plugins!?!? (Safe or Not)
ScriptRunner - run scripts in studio
Plugin Development in a nutshell
MacroX - Edit, save and run scripts fast anytime, anywhere!
Emancyphur Community Group Information
BytExecutor: A simple, free, and intuitive in-studio code executor
Crack down on malicious plugins on the site
Getting the vertices of all kind of mesh!
A way to select parts with command bar?
ScriptRunner - run scripts in studio
Command Bar Missing
Ability to execute a singular script
Studio Settings saving command
How do you delete player records from datastores?
(v1.0) Components - Simpler, smarter, modular components
Color code text in a TextBox
Converter Module: Instance ↔ Table | Save Instances to DataStores and More!
Elttob (Elttob) May 5, 2020, 7:44pm #2

Wow! What an amazing plugin! What handsome fellows could have developed this work of art

Nice! This command will sure make command execution easier, especially when figuring out the cause of errors since it tells me that it’s line 1. No more having to create a script, type it in, copy it and paste it to the command bar, and execute it!

This really looks nice! So, i yet not see how it can help me, but really was interessing.

Very useful! One of my biggest issues with the command bar is debugging an error since everything is usually on one line. This will make my life so much better!

I love this. For example, if you make a weld script you can save it as a script in this plugin and essentially have a welder plugin. This is like the plugin of plugins for programmers. This rocks.

This plugin is amazing! I get so frustrated when I have to open a script editor, type the code I want, and have to go back and paste it into the command bar. I like this plugin, however, I have 2 major problems.

That’s all! Keep up the good work.

Thanks for the feedback! We’ve noted these two points down and we’ll see what we can do

edit: Just had a word with boatbomber and, due to the way that the syntax highlighter works, it doesn’t appear to be feasible at the moment to support text wrapping. Roblox doesn’t give enough information about how text wraps currently to allow for correct syntax highlighting across wrapped lines.

However, we’re still looking into undo support! Thanks for the feedback again

Two things I will say:

Side note: I’d really like a history waypoint to be added as mentioned above. That would make this plugin even more useful than it is.

Thanks for the kind words!

To address your first point, we feel your pain. As a fellow tabs-over-spaces guy, I’m equally frustrated! Unfortunately, for some reason, Roblox doesn’t seem to understand how to render tab characters in text labels (in fact, it renders them thinner than regular spaces!).

As a workaround to this issue, we decided (at least for now) to concede to the tyranny of the space-indenters and simply replace any typed tab characters with four spaces. We’re not closed off to the idea of changing this behaviour, but for now we decided it’s more viable to simply work around the issue. Even if it means we have to use those cursed spaces.

Secondly, there shouldn’t be a hard limit on the number of scripts you save. As long as each script you save has a unique name, you shouldn’t run into any problems. Of course, there’s other limitations on the number of saved scripts, for example the amount of space available in your computer’s memory.

Again, thanks for the kind words! We’re definitely going to prioritise working on an undo system for InCommand - it seems to be a popular idea

Saw this on Twitter before release and I was immediately interested, flipping to the server constantly was a pain.

I’ll definitely be buying this and using it.

Thank you a lot for making this plugin. It is probably one of the most useful plugin I have seen in a while. I bought the plugin as it will come useful many times in the future.

Before I use this in a game, I have a few questions:
Are you able to use this in-game?
How does it run the code?

One of the most useful plugins I’ve seen thus far! Amazing.

Really awesome! Been using for some things already. 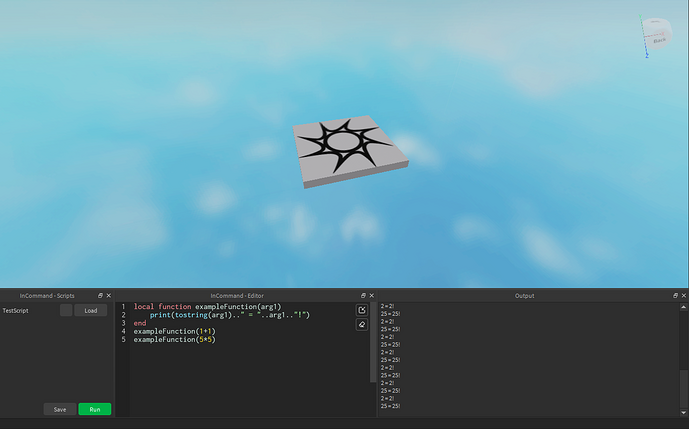 Thank you so much for this! The design and all is perfect!

Great job done right there!
This is really worth the 125 Robux!

This is outstanding! Many developers would be vary appreciative of your hard work to release something like this. Keep it up!

Community Resources is for free/open-source resources, so moved this to Cool Creations. Cool Creations is visible to TL0+ (anyone with a Roblox account of appropriate age, just need 1 click to login) so should be alright with visibility.

Alright, thanks for clearing that up

What about under 13 users?