Note: The replies to this thread are about the old version (V2), not V3. To see the replies regarding V3 please skip to this post.

Ro-Render is a tool designed to create a top-down orthographic projection of your maps. The primary use case for this tool is to create minimaps in game. This is the third iteration (technically fourth, since the original idea was built by @Widgeon) of this tool and it may be useful to look through old posts and documentations to understand how it works (do note that a lot of what you read in the old posts will no longer apply to V3, only some of it will). It is based on a tool originally created by @Widgeon and then modified for ease of use. The modified version is what is known as “RoRender” (V1 and V2).

Huge shoutout to @StrategicPlayZ for pushing Ro-Render to V3, this was a major undertaking the result of which is massive performance gains and an overall cleaner user experience.

V3 is a completely new version of this tool which matches little to nothing with V2. The main changes in this version are:

Firstly, it is highly recommended that you do the render in a local copy of your game as this will enable you to delete transparent and translucent parts (along with a few other adjustments you may want to make for the minimap) without affecting the main game.

Now you’re all set for rendering your map.

Adding the Ro-Render V3 settings into your game:

Now that you have inserted and loaded the default settings, it is time to modify them according to the map and your own liking.

Now that all the settings have been configured, you may now close the plugin and start the rendering.
Make sure to recheck that the Ro-Render Application is running and that the “Start Server” button has been pressed.

It is recommended to open the task manager (on Windows) and activity monitor (on Mac) to monitor CPU and memory usage while rendering.

While rendering Studio may become unresponsive. Do not click on anything in the Studio window while it is unresponsive.

The rendering will take a lot of your CPU usage. If your PC starts to overheat, you can pause the render by setting the “PauseRender” attribute of the “Actors” folder. You can only set this while Studio is responsive, this happens every few seconds when the script temporarily pauses the rendering (to send the pixel data computed so far), so just wait until Studio is responsive then quickly set the “PauseRender” attribute of the “Actors” folder. (This attribute has not been very thoroughly tested so if bugs arise please report them here.)

Now, click the small arrow under the “Play” button in Studio, then press “Run”. This will run the game but will not load any players in, this is important because if you press the Play button your character will be rendered in the map as well (which is not good).

Once the rendering is complete, press the “Download Image” button in the Ro-Render Application to save the render as a .png image.

A major caveat of this plugin is that it cannot render texture. If your map uses a lot of textures especially on large meshes/unions/parts, then those textures will not show up in the final render, only the color of the part will show. You can attempt to fix this by coloring the part to a color that matches the most with the texture, or manually make a rough outline of the main features of the texture via parts and color them accordingly (tedious, I know).

This limitation is not from this plugin, rather it is from Roblox itself (there is no way to get what color of the texture is displayed on a specific point of a part, we can only find the color of the entire part or the color of the terrain’s materials set in the properties of Terrain).

Nice! Definitely going to be coming back to this as my map changes and changes. This looks so much more user-friendly as well. 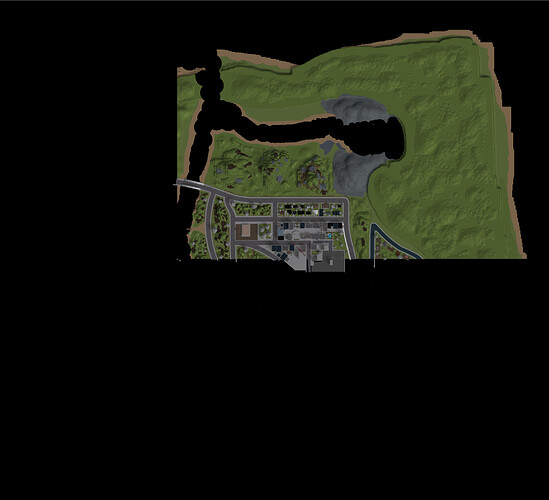 (stumped me for like an hour or two, did like 9 renders wondering what I was doing wrong

So basically, if you haven’t done it already, make sure the PlayerAdded function accounts for people who could’ve joined before the function connected:

Again though, amazing job. This plugin is extremely convenient and I’m glad to see it got updated

17 Likes
How would I position the minimap image according to where the character is?
Viewport frame help
reteach (reteach) January 6, 2021, 5:28am #3

I forgot to mention that in the caveats section, it is updated now.

And I have updated the plugin to fix that issue. Thanks : )

Wow, just wow. This project has evolved in such a good way. From glitchy Java files to this! Honestly you have done an amazing job!

I tried it out for an underground facility map and with some adjustments, it actually covers most of the layout very nicely. Since an interior-heavy minimap is not really guaranteed to be perfect, at the very least, it’s pretty useful in making it easier to trace out a custom minimap from the generated image. 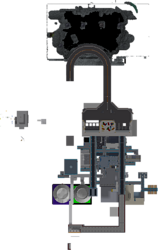 Edited (objects above and below the intended level removed): 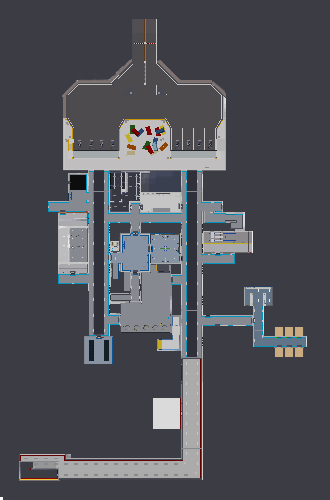 I tried it out for an underground facility map and with some adjustments, it actually covers most of the layout very nicely. Since an interior-heavy minimap is not really guaranteed to be perfect, at the very least, it’s pretty useful in making it easier to trace out a custom minimap from the generated image.

Thats gonna be a browser specific problem, make sure your browser is updated or try a different browser.

Hey this application never seems to work for me on any version. I did this on the basic city template. I installed the plugin, went into studio, opened the plugin, clicked auto configure, ran the exe of RoRender, clicked start server on RoRender, started up a local server with 6 players because i have 6 cores, waited until all players loaded in, checked RoRender… nothing happened, opened up the exe again…nothing.

Test 2: I thought maybe it was a firewall issue so i disabled my firewall. I did the same steps and it did the same thing it wouldn’t load the image, time would not start, nothing.

Here is my video showing what i am doing 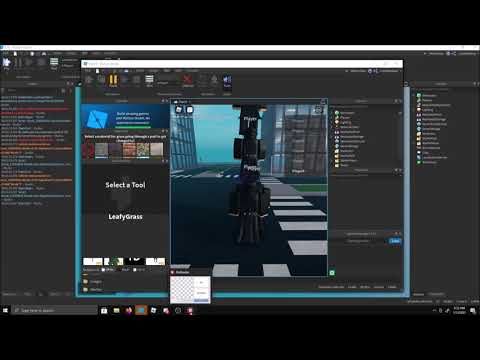 Did you click inject scripts on the plugin? I’m probably going to remove it in future iterations because a lot of people forget. 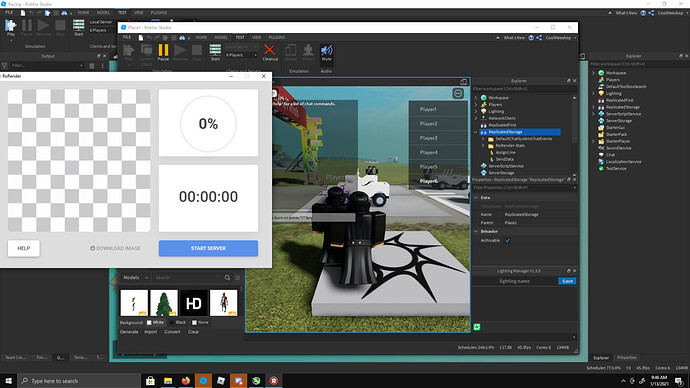 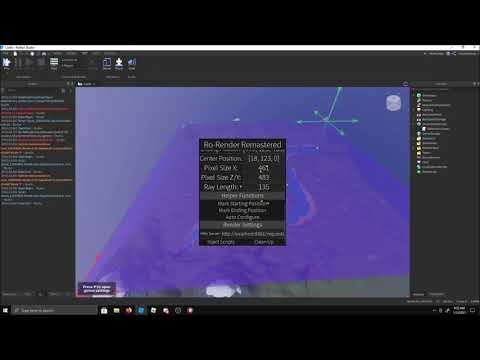 I’m having the same issue, it used to work, just now it dosent want to…

When i used it, it took a few seconds to start, and when I googled how many cores my cpu has, google was different than what Task Manager was telling me. Google said my cpu has 6 cores but task manager was saying there’s 4 cores.

Task Manager is accurate, because it shows you how many cores you actually have. As it a main application in your computer. It should know

Yea when i tried with what google said the script gave an error, but when i went with what the task manager said it worked fine

Weird because i get no feedback from RoRender at all. It just sits there doing nothing, even after the steps that i needed to take.

Any output in the studio window?

I got a render by having HTTP service on in the template game… i am an idiot i forgot this thing needs HTTP service to work i saw the error in the console… i am gonna try to get one of my game. The render of my game came out like this

… i will try to render a part of the map 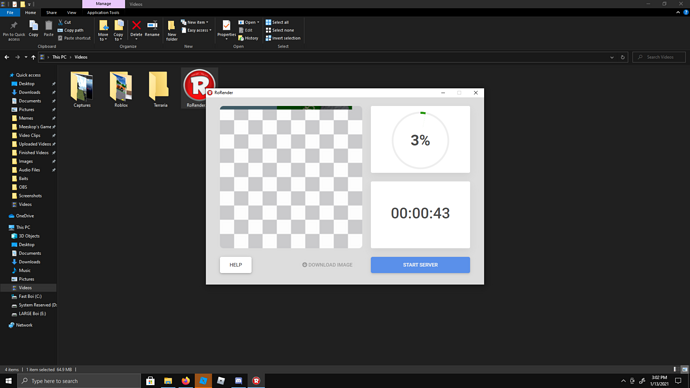 One thing i noticed is a changed the size but its rendering a different part of the map aslo its being cut off… that might be because i tried to make a small size render but it didnt render that area selected… i thinks its rendering my entire map, which is good 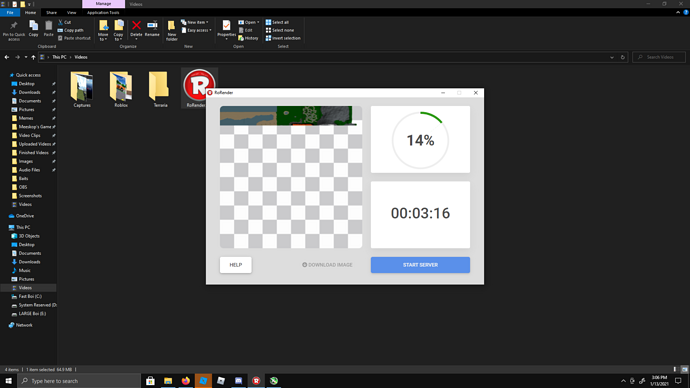 Suggestion maybe tell people to turn on HTTP service, because if i completely forgot some people might aswell

One thing i noticed is a changed the size but its rendering a different part of the map aslo its being cut off… that might be because i tried to make a small size render but it didnt render that area selected… i thinks its rendering my entire map, which is good

I’m not sure what you mean here

I updated the post to include turning on HTTP requests

I wrote that part in a hurry as i had to do something. Here is a better version.

I am really bad at explaining.

I clicked Auto config then made the purple box smaller, but RoRender rendered the auto confgure instead of the smaller area. This could have just been a one time glitch.

The cut off of part i was referring to was the void i noticed it rendered the void as transparency.

Also here is the final render. I need to add water around my map. Its an old map i made so i am trying to rework the terrain. So stuff looks bad as of now. 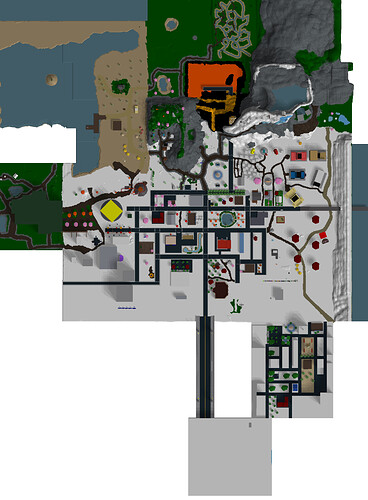